A response for David Jay 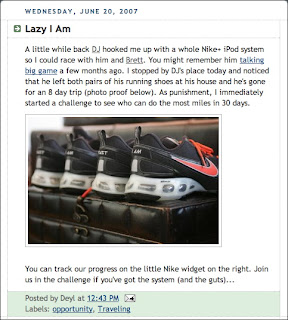 We would like to acknowledge recent attempts in the media to descredit David Jay's commitment to personal excellence and physical well being.

A recent posting by a Mr. Deyl Kearin title "Lazy I Am" encourages speculation that because there were two pairs of running shoes left behind by David Jay that Mr. Jay hasn't been keeping up with his rigorous exercise regimen. 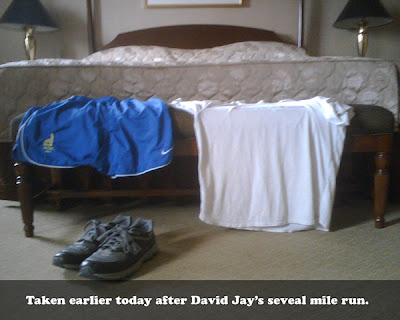 Today we would like to provide proof that David Jay has indeed continued to retain his high standards of excellence and just hours ago undertook a several mile run in the beautiful state of Maine where he holds his next engagement later today. We would also like to take this time to encourage all of you to hold yourself to high standards in all areas of your life and continue to support Mr. Jay in his efforts. 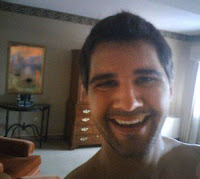 Punk...running in Maine but can't touch base with old friends :)

btw, that mirror in the background of the bottom photo looks mighty blurry... why don't you post the original?

Hahah...you guys are too funny. I didn't even notice the blurry mirror until you pointed it out deyl.

weird... I think I can make out something in the blurry mirror... looks tall... skinny, and naked?

What's the deal with this recent obession with your derriere and posting it all over the internet? I'll pass on that.

...you should be thanking your buddy Deyl for pointing out that picture to everyone!

If you guys look closely you'll see that it's a Monet painting in the background but I am a bit concerned about a few of you who dreamed of it being something else. Weird...

proof of anything this is not

you are such a dork -- never let it be said otherwise :) you totally make me laugh.