I can do it myself!

I dated the cutest brunette back in college and one day her mom told me that when she was little and her parents would try and help her do something she'd say, "I can do it MYSELF" and it made me laugh because she really never grew out of that..lol..actually she never grew much period because she was just over 5ft tall, but absolutely gorgeous.

So even though all of you know what a big fan I am of outsourcing there are certain times when my stubborn "I can do it myself" attitude takes over and today was one of those times.

Originally I tried to put Windoze on my MacbookPro with bootcamp and jacked the whole thing and had to have the techs fix it and so today I had Kristin schedule a tech to come out tomorrow to put Windoze on but tonight I did it myself! 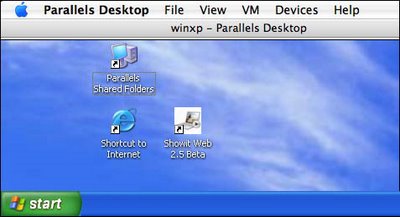 It's awesome having two operating systems on one machine and especially for me because I do a lot of testing with the Showit apps and I've also been testing other apps like Bridge, Lightroom, and Aperture and now I can just push a button and instantly have Windows to play with.
Posted by || davidjay || at 2:30 AM

I can not bring myself to put Windoze on my pretty little laptop. Besides George I have seen your wallet I can't imagine you had enough room on your hard drive... LOL!!!

There is no way I would have enough room in my machine for it either BTW!!! My hard drive is like South Cal real estate... :)

Just thought I would give you a hard time on Thanksgiving Eve!! So happy

Thanksgiving to ya! I am thankful for what you have done here and everyone on OSP! You all rock!

HEY which do you install first, parallels or windows?
I know you hold the C disk when the windows is starting up, but when does parallels come in?

i have to assume you made sure the icon was in that small peice of screencapture to tease us all.

what do we have to look forward to?!

DJ - should we hunt this girl down and tell her you want another chance? ; )

So, you don't have to reboot to get to Windows? You just have to start Parallels and it switches for you?

But what do you do when Windows freezes up and you can't even get your mouse to move and get back home to the wonderful OS X? Warm up your three finger attack and get ready to start using your CTRL+ALT+DEL buttons a whole lot more! :o)

Don't say Windoze, its just stupid. It's something the kiddies say. Windows is good for some things, there's no need to disrespect the name.

Jason - Haha..I did feel a bit sad to corrupt my baby with the windoze OS but I had to...

Fong - You have to install Parallels first and then through Parallels you run through the Windoze install inside of this little screen.

Nate/Lisa :D - Coming soon! We just sent it out to a dozen or so beta testers and it's been rocking. We're just in the process of cleaning up the Interface a bit to make it more intuitive.

Stacy - haha...a couple of years ago I posted a picture of her in the journal section of OSP and it turned into this whole saga! It was pretty funny. At that time Anonomous users were allowed to post and it was a pretty funny ordeal. Read it sometime if you're bored.

Brett - no reboot - it just launches like another program!

I'm bored, alright, and the time is now! I'll report on my findings. :)

had this book when I was a kid and I always used to say "I can do it myself" because of this book.
Tricia

Yeah I put windOOOZZZZZZZe on my mac just to play games!!! SSSHHH dont tell my wife!

I love windows...I used to be in charge of the MAC lab on campus tho- I gotta say that right now if I were starting over..

AND i made my very own NEW blogspot account for the biz!

And I am thankful for...YOU!