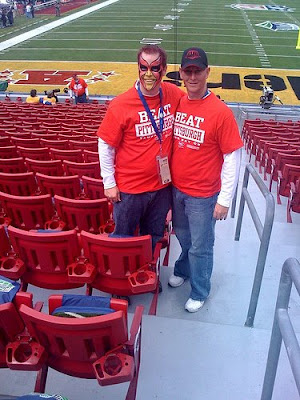 I really don't even like football or the Cardinals but my business partner Todd is a huge Cardinals fan. I've known him since I was 10 years old and he even loved the Cardinals then when they sucked and never won a game. Anyway.

As the Cardinals kept winning I kept feeling worse and worse for him because I knew if they kept winning he would have to keep going to the games. lol. So I was secretly hoping they would lose so he would save him some cash but now that they are in the Superbowl I hope they win.

Here's a picture he just posted from the stadium! :) He's the one with the face paint and that is his older brother who was friends with my brother growing up. Our brothers both played baseball which is an even lousier sport than football. Actually baseball is more of a game than a sport. The only real sport is soccer. :)
Posted by || davidjay || at 2:11 PM

I'm the same. Forgot that the superbowl was even on today. Normally I would know but only because it's the best day of the year to skateboard without having to deal with cops - but the kidney stones put a stop to it this year :)

At least he's a true Cardinals fan, they did not even sellout out their first playoff game! Can't stand the folks that jump on the bandwagon, like when many did during the Patriots SB runs.

How many would know they were the Chicago Cards?

Amen to the soccer comment! Going to see US vs Mexico in Columbus next week! VIP Midfield tix with Swan!

Ur the man Soccer is the best sport on the world specially the european leagues and games , but F1 is good to

You did not just trash baseball ... this means war.

If you don't use your hands, its only half a sport ...