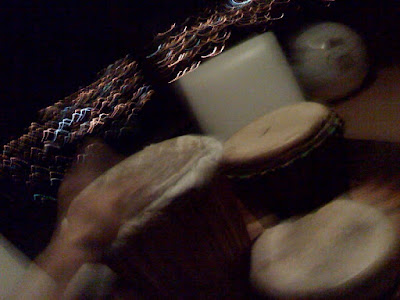 Amy, Vanessa and I hitup El Paseo for a late dinner and some margaritas tonight and midway through dinner we were like let's get drums and do a drum circle! Crazy right b/c it's already 9:30 and I've never even seen drums for sale anywhere but Vanessa gets on her iPhone and sees that there is a guy in Santa Barbara who makes these drums.

So we call the number on his website and he answers and Vanessa says that we want to buy some drums and he's like "yea ok who is this" and she's like it's Vanessa and he's like "do I know you?" and she's like "no but I want to get some drums." He totally thought it was a joke but he said he'd meet us down by the beach b/c he lives way back in the mountains but he needed to come down to pick up his son. So we drive and meet this cool hippie dude named Ishmael who is a Brooks Graduate who pulls seven or eight drums out of his truck and he talked us through the different sounds they make and we ended up buying three drums. Then Amy had to be a lamo and go home and work so Vanessa and I came back up to the house and played the drums and she even danced and played the drums at the same time. Tomorrow night Deyl's hosting a meeting here for Opportunity International and we're gonna have a legit drum and dance circle after that. I'm so pumped right now.
Posted by || davidjay || at 11:33 PM

Ummmmmm hello, I had to work and make my bed:P Next time I'll be all about it:) LOL..... I had already branched out quite a bit for one night:)

LOL ... Going shopping to White | Black is not branching out.

I love the absolute randomness of this post :D And the fact that it's 3:30am just adds to it!

You make me laugh.

i want IN!! my mom has a huge percussion room at her house and we did drum circles at christmas! total non-traditional holiday for white people :)

i want IN!! my mom has a huge percussion room at her house and we did drum circles at christmas! total non-traditional holiday for white people :)

but u guys should hav come to soho for salsa dancing!! it was soooooooooo much fun! u'll hav to come w/us next time :)

I went to sleep with drum beats in my head, drove around this morning beating my steering wheel, and just might do a little jumping around to warm up my Afro-fusion dancing skills.....so needless to say, I'm excited! :P

p.s. I say we go hang out with Ishmael later too...that guy was sweet! Great energy:)

I read it as, "Amy had to be a llama." But that would actually fit in with the randomness of this post.

I bet I know who was even more stoked about the drum circle...! Your neighbors! :D

What else was passed around the circle, pray tell?

ok... but seriously... don't you have a sign about hippies hanging somewhere in your house??? and don't only hippies do drum circles??? ;-)