After a great weekend in DC and Virginia we're on to North Carolina! I've never been here before so I'm trying to rearrange some things so we can stay an extra day. We had originally planned to do three shows in a row this week but then we chose to combine the NC and SC shows.

I also have to give props to my man Regis (although he doesn't have a blog!) :) who has been traveling with us! Regis has been one of my advisors for years know and has given me so many great ideas and has taught me so much about business! Regis actually got me my very first workshop way back in the day at the Brooks Institute! He's also one of the funnest and most creative people I know and he uses that creative in business which I love. He came up with the idea to hide the little characters all around the town and giveaway free stuff and so in D.C. we hid him! I hope he's still there though because the security guard kept making us turn off the camera so I think we were being watched! 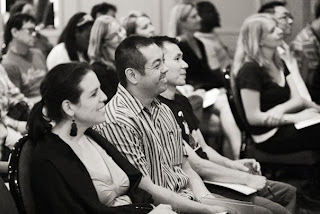 Also, I never got back to the NY show which was awesome! We had to blast outta there that night but Kenny Kim put more stellar shots on his facebook page!

There were also some nice girls from NILMDTS there and you can hitup Aurora if you'd like to connect with this organization which is doing incredible things. I've heard lots about them and it really is a blessing to those mothers who 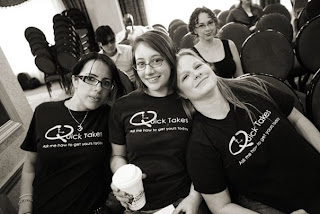 have lost their children so please check it out.
Posted by || davidjay || at 9:09 AM

Hey David,
As Hannah approaches Florida later this week, any word about the Orlando tour? Is it going to be postponed or changed at all? I'd like to know before I buy my ticket.
Thanks!

DJ, I think it's the other way around. Over the years, you have taught and inspired me in more ways than you know. I appreciate your friendship and your generosity. Thanks for including me in your adventure.

I miss you guys like a fat boy misses his junk food. Have fun tonight in NC! :-)

Regis has to be one of the funniest freakin' people I've ever met!

Just wanted to thank you for an awesome time at the DC stop! It was so nice to meet you. Check out the post on my blog about it!

Hey DJ thanks for the mention, hopefully the more people who know about the work we do with NILMDTS the more volunteers we will have to serve those in need! You know the NILMDTS page uses the same quote you do about making a living, and making a life...

And thanks I'd be happy to give anyone who's interested in what we do the skinny on NILMDTS... thanks DJ you are a peach!

dude - tried to pre-order the DVD and it told me that it was shipping to my region yet!

also, you're talking to a showit sites lifer. ;) pretty cool. can't wait to show you what i'm working on!

sorry - WASN'T shipping to my region yet. my bad.


Check who is on my couch, reading a book!

Thanks DJ for coming to D.C. and sharing! Have a great rest of the tour! Thanks for the props on your latest newsletter too.

I didn't smile in that pic. Hmm I wonder why?! Anyway, thanks for the Props.

So glad you plugged NILMDTS! We need more photographers in DC too!

Mesmerizing Moments said...
This comment has been removed by the author.
6:28 PM