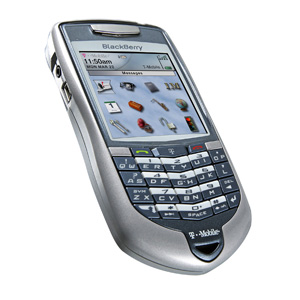 I really love simplicity. It seems like our lives are full of so much stuff we don't need and that became really evident in my replacement MDA phone. It had tons of cool features (some of which I liked) but it had way to much stuff that I didn't need so I took it back and got another blackberry. I was reading in Business Week this month about a cool new Blackberry "Pearl" coming with a camera which I'd really like on my phone but all the other jazz just slows it down I think. Nathan Holritz showed me this cool new service for reading magazines called Zinio Reader where you can just order magazines and get them on your computer and then you can search them for keywords and stuff which is way cool. I don't suggest peope read a lot of magazines "Fast Food Knowledge" but there are a few good ones out there.

oh yea...BTW....for the last month I didn't have any numbers in my phone so if you sent me a text or called or something I might not have responded because I didn't know who it was or didn't have the number but I'm syncing my new blackberry right now so that will be cool to know who is writing and calling. :)

Yeah.. I kinda figured that:)
Blackberrys rock!!!
Have fun at the party tonight! I seriously felt like sneaking in sarahs suitcase:) lol

Blackberrys do rock - precisely because they are simple.

Usability and design over features any day!

i love that "back to simplicity" means going to a blackberry.

The BlackBerry Pear / 8100 will be available next Tuesday by Tmobile. It'll have EDGE for faster Internet! :-)

Also RIM announced it officially this week and launched a cool site for it:
http://www.blackberrypearl.com/

For about a month the info was out...thru a leak It's now on Tmobile's site:

Anyone see the cool ads for Verizon's Chocolate by LG? The pearl will be like that (mp3, camera, etc) only better! I'll be upgrading from my 7105 in about a month!