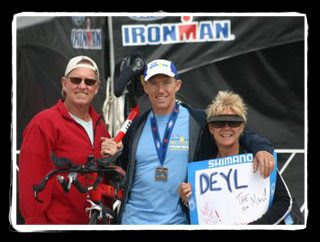 So it's been pretty cool over the past couple of weeks to see how my friend Deyl's Ironman performance has inspired so many people!

I've been getting emails and phone calls from people I've never even met before telling me how now they're gonna start training and it all goes back to Deyl simply doing something he loved and sharing his joy with others. 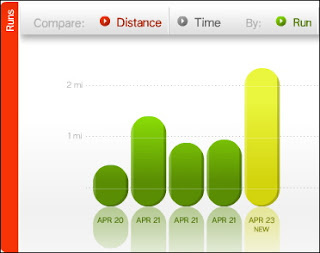 This morning I got up and went to the gym and had my best run yet. I've finally worked out some of the kinks with the Nike+ stuff and am getting the hang of how it works. My previous runs have messed up my average time because I forgot to turn it off when I'd finish and then it would keep counting the time when I was getting a drink of water instead of running.

Here is some of my info from the Nike + site...

I like the run graph because it shows your pace and as you can see I would run faster at times. I've been listening to this podcast from Robert Kiyosaki and it's so good. I've been learning so much and getting healthy at the same time and I think I run faster when he talks about cool stuff. I dunno.

and the final feature I like about Nike + is the ability to talk trash to the people you're racing against. Right now it's just me and Brett in this race and he's already claiming his knee hurts...what a baby. Seriously. It's only been two days. Anyway, I got one of these things for deyl as well but he told me that he ran 16 miles yesterday so I'm not gonna give it to him.

So how many of you are training! I want to know and if you have the Nike+ stuff let me know too and we'll make a new challenge with everyone! I want to talk trash to all of you. I'm much better at that then actually working out!

Ooooh, I want in on the trash talk!
Ive had this Nike+ stuff since Christmas but never actually set it up.
Count me in ;)

Nice!!! Once you log on and get an account name with Nike let us know! My Nike name is davidjay...that's my real name too. :)

Hey DJ - I just do the sprints, started 3 years ago. I love my Oakley thumps when running, I use the Polar heart rate/distance system sometimes. Nike thing looks fun. Is that 8:06 pace with drinking water or your accurate time? That is fast for starting out. My run is the worst. I am at 24min for a 5k just barely. Slower than that off the bike. Time for some brick workouts next for you I think? All this training will keep you sharp mentally and physically on those long weddings. The addiction will be on its way to you soon.....hopefully. You were great at WPPI and motivate me as a photographer now I have to keep up with my training with you in mind too...the world can be so small sometimes.

Oh yes I'm training. We were on the track at 6:05 this morning and we swam like 100 laps in the pool afterwards:)

us girls don't need the Nike + thingy, we wouldn't want to make you boys cry:)

Rock on Steve! Hey PPA is in Florida next year I think so let's run together out there!

Thanks Amy - the thought of running alone makes me cry so thanks for not making the pain worse!

all i did was cross the finish line... Paige is the persuasive one!

I'm limping like a pimp today, so maybe you should give it to me. I'm not going to be hitting any respectable speeds for a while :)

I'm calling you that PPA offer next year DJ - by then I will be reading "I am really fast" on your shoes!

Gosh DJ...you better make up your mind!! You finally got me to start sleeping in now you're waking up super early!! LOL!

Really exciting about all the people jumping on board!

I do not believe in running, unless it is from something. But, I do believe in trash talking...to make other people run.

How do I know you are not cheating? A live feed might be appropriate.

This is the PERFECT time to start my outsourcing efforts...

DJ- I just helped Brett figure out what is wrong with his knee... just giving you fair warning that he is on the road to recovery! Better start runnin'!

Rebecca! That was very nice of you but he's gonna need more help than that!

I'm training for a marathon right now, so it's good to hear that other people are out pushing limits, enduring the monotony of miles.

DJ- You rock! We are all still awaiting your announcement of which tri you signed up for? The carp tri or the SB tri?

Deyl is amazing and so is passion. Most people think passion is a selfish thing, but when one person follows there passion, look what happens. Following your passion is one of the most loving acts we can commit.