So I've been without internet the last couple of days and have logged about 50 miles of walking through this wonderful city...here is a quick catchup... :) 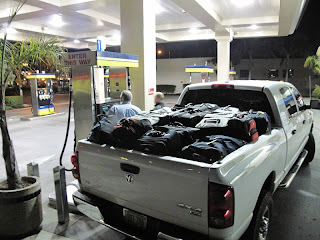 Saturday - Sunday:
We took off from LAX bright and early with the maximum amount of luggage allowed. 3 checked bags and two carryons each! I travel really light but I brought two bags of supplies for the Young Life crews here so it was a new experience to have a couple of monster bags along with my little carryon and my purse ;) to take care of. Here is a picture of me and Katie, the Parsons daughter. 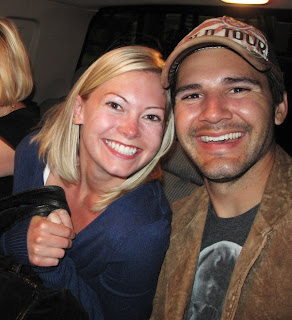 Monday:
The first 24 hours in Russia have been incredible! We got off the plane and stopped by the "Club room" that the Parsons built and ran Young Life in during their 20 years here. We were dropping off tents and supplies for them to use and the current leaders had prepared a lunch for us and what a sweet group they have! 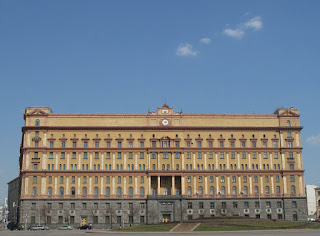 Then we went for a short walking tour in downtown Moscow and went by the KGB building and rumor has it that if you try and walk around this building twice you will never be seen again. I've been learning a lot about Russian history and how back in the day everyone was fighting for control and the extreme measures they took to get it were gnarly. 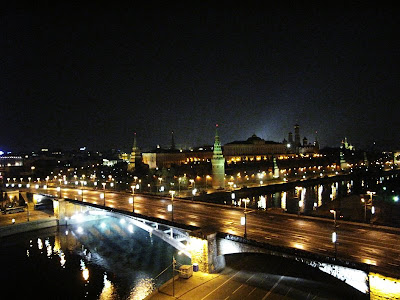 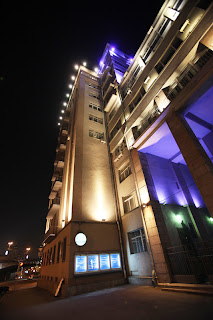 Then we came to unpack and meet our hosts Beth and Carl who are friends of the Parsons and their apt is in the most famous apt building in Russia - "The House of Tears" and it was named that because during the communist era they used it to house the brightest minds in Russia here but then they'd have people hiding out in the walls listening to everything they were saying and if they ever opposed what the gov't was doing they would disappear...thus calling it the "House of Tears" - it's also called the "House on the embankment" 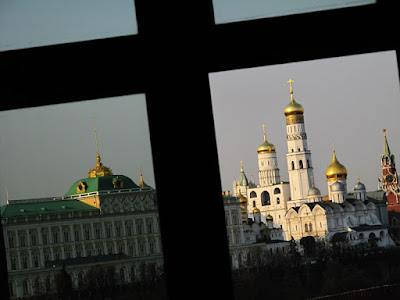 Tuesday:
This is the view of the Kremlin from the apt and last night they were doing preparation for the Victory Days celebration and they had huge tanks rolling down the street and you can see them in this shot... 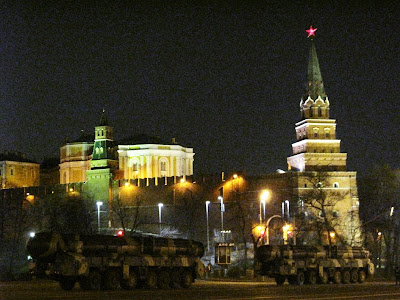 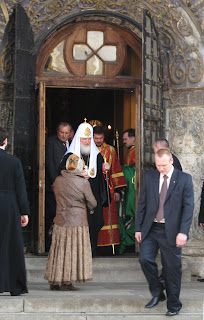 In the afternoon we had two sweet experiences! We were out touring the Kremlin and in one of the chapels they were holding a special service so we hungout to see what was going on and out comes the patriarch from the Orthodox church. He's like the Pope for the Orthodox and after security whisked the big wig away I snuck up on the porch and got this guy to pose with me! :) I forgot his name though.

Then Gary took us to meet with Father Alexander which was unreal. He was one of the only priests who refused to partner with the KGB and then stuck his neck out there to try and get the church here to embrace some western ideas but that didn't bring him much popularity! None-the-less his church is thriving in the center of Moscow. He spent all afternoon sharing stories with us about the past 70 years of the church in Russia.

To finish the day we hitup a "banya" which is a russian bath. Wow! I grew up in the locker room playing sports so being around naked dudes doesn't make me uncomfortable but this took it to a whole new level. It was wild. Essentially we had our own little room to hang in and have snacks and drinks and then they'd heat up the room. Now when I say heat it up I mean like to 180+ degrees! When it was almost ready all of us would crowd around this door - butt naked mind you - and when the door opened everyone would run and the room isn't very big so once the seats filled people would stand and even kneel in every available space. I'm not sure if this is a sight you want to imagine but it's one I will certainly never forget. Then this dude would come in with a fan and start waving all the hot air down on to us and then we'd sit around and get these bundles of dry leaves that had been soaked in water and we'd hit each other with them which stimulates the blood cells close to the skin. After that we'd get out and jump into an ice cold tank of freezing water for about two seconds and then go back to our room for some more snacks and rest. We repeated this cycle 4 times before calling it a night. 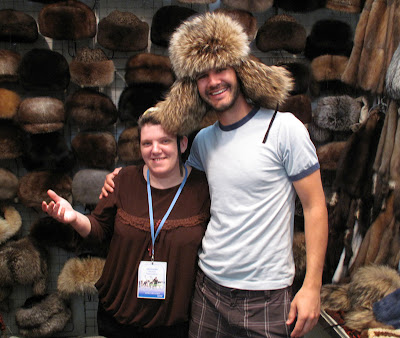 Wednesday:
We've been trucking around through museums and what-not for most of today but the highlight for me was when I found this lady who makes these Russian hats by hand along with gloves and other goodies so I bought this hat from her!

Thursday:
Today we just flew to Krasnador and we'll be here putting on a Leadership training camp for Young Life leaders across Eastern Europe. The reason I am here is to learn how Gary leads and how he has developed the leaders here. It's amazing to be a part of this and I'm excited to share more whenever I can get back online. :)

Lastly, thank you for all your prayers! The trip has been blessed and I've been praying for many of you too.
Posted by || davidjay || at 6:21 AM

Haven't laughed that hard at a blog post in a LONG time. I don't know what's funnier, you standing next to the Patriarch of Russia in your T-shirt, sunglasses, and baseball hat, or the story about the "banya."

ROTFL - oh this is too funny!

God bless you for your work their David we will continue to pray for a safe and profitable trip ;)

DJ, what an amazing experience thus far. Very cool of you to take the time to share your journey. The history has got to get your head spinning a bit. Can you imagine having to deal with the KGB mentality in the US? The closest we came to that was probably MacCarthyism. Safe journey's.
m-

What an experience! Keep shareing your sotries whenever you get the chance my wife and I enjoy hearing about you and your crazy fun life!

yeah...I think the "banya" thing is more than I want to know about...glad to hear you had fun, though.

(note to self-re-evaluate my life)

I saw the "banya" thing on an episode of Bizarre Foods with Andrew Zimmern once...so I've got a real visual--minus the nudity part! LOL
One phrase I remember from when I went to Russia was God bless you--not spelled correctly but as phonetically as I can spell it--blago slavay vos gospot. *I think*

That was better than any comedy show! EVER!! Banya sounds crazy. Why didn't you ask the patriarch for his hat? Trade him for the furry hat. He would love that!! Good Luck the rest of your trip.

This is the post I've been waiting for! Now you're making me jealous :D

Is it just me or is the Parsons' daughter ADORABLE?? She's so beautiful!

And um...thanks (??) for the visual on the bathhouse. I am nearly speechless. (But not, because then the world might end and Jesus would come.)

What an amazing trip...sending a prayer up for ya'all now for safety and that you all can accomplish amazing things while there!

Wow, you always have a great time where ever you go! That's flippin awesome Brother!

Duuude, can't wait for you to wear that hat in Santa Barbara! :)

Sweet recap DJ. I wish I can do a good job as you did trying to recap my 2 weeks in Italy! :) Love the hat!

This is an awesome post!! :-D Can't believe all the crazy things you're doing!

Your photos bring back memories of the time I spent in the USSR back in 1986. Seeing those "tanks" (those are missiles capable of delivering nuclear weapons) reminds me of the nuclear bomb drills we used to do in school when I was a child in the 60's ("when you see the flash of light, hide under your desk")...yeah, like a desk would protect us from a nuclear explosion. Anyway, I digress...Russia is awesome and the people are friendly. Enjoy your visit. Go see St. Basil's Cathedral at night; its colorful cupolas are beautifully lit, making for a great photo op.

Hey DJ, I'm stoked that you're having an awesome time in Russia! I laughed so hard when you were describing "banya"! :):) A friend of ours owned a banya so we'd go there like every 2 weeks, did it ever feel GOOD! Your post brings back some sweet memories!

DJ, i freaking love the hat, you gonna sport that here in cali??!