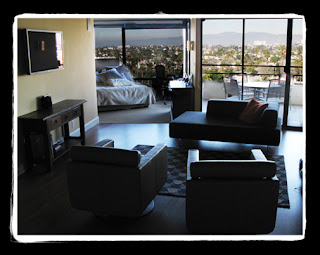 This weekend Deyl and I took little time to pamper ourselves. Deyl invited me down to a Maroon 5 concert last night which was super cool. We almost rolled into the concert wearing matching tank tops that some guy was selling outside but we just couldn't do it.

Deyl has a lot of banking friends who want him to buy things with their money and they had invited him to their VIP booth which had a private chef, bar, and deserts! It was insane and then we stayed at Gary Fong's killer condo in Marina Del Rey which I love.

This morning we had breakfast at this nice French place down the street and then went shopping. I got the coolest things! I first wanted this sweet shirt which Crystal is trying to hunt down now but since they didn't have it I bought a robe. It's heavenly. I never want to take it off. I don't even know what it's made out of but it's the softest thing ever. Then on the way out of the store I saw this jacket and it was super impulsive but I had to have it. It's almost as comfortable as the robe but more appropriate to wear out. I've never seen or felt a jacket like this and it's like the silkiest leather you've ever felt. It was $800 which is gross but since I'm shooting a wedding tomorrow I felt ok dropping a grip on it.

Then we were off to 3rd Street in Santa Monica for more retail therapy at the Apple Store. I got some fun goodies to try and dial in my place a bit more on the wireless side. When I told Allie about the trip she said, "Wow - I'm glad Deyl is married."

Tomorrow I'm gonna be shooting and I'm going to try and turn on the LIVE cam so check it out on - davidjay.TV - or here on the blog.
Posted by || davidjay || at 9:11 PM

you two are soooo cute!

I miss you and Deyl! Have fun shooting tomorow!

you didn't post the pic of my pink shirt!

Paige said the same thing as Allie: I'm glad we're married or else i'd be worried :)

Yay! I am so glad you are doing a wedding again :D

I am with Paige on this one. There are so many things I could say about this post, but I won't : )

You can still be worried if Deyl is married.... doesn't anyone watch Oprah?

I love my robe too. Super comfy.

I'm glad you decided you never want to take it off... especially for the photo.
;)