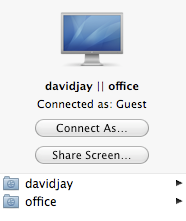 This last week was so packed and I'm spent. We had a Showit meeting here in SB and so it was all day meetings and planning and then trying to squeeze in time around that with friends and so I've felt on-the-go more than I like.

But one thing I'm loving is Apple's new OS - Leopard. The networking stuff is so easy and one of the features I like the most is the screen sharing. I used to do it with a "VNC" client but that's not nearly as easy as just being able to click share screen and be able to run any computer on your network. I use this mainly for music because I have a couple of Airport Express stations around the house and I like to play music from my main computer but I like to be able to control it from any computer around the house.

I'm off to play in a soccer tournament right now...I'm excited. I have gone on two runs this week, played Wii boxing (which is a workout) and now playing soccer today. I'm proud of myself.
Posted by || davidjay || at 7:11 AM