Banking in my PJ's

Deyl made me read Richard Branson's autobiography "Losing My Virginity" and it taught me more about business and how it's run than any other book I read this year. I think I'm a lot like Branson in how I operate and that is good and bad but one of the things that I realized from reading the book is how dependent we are to banks. Branson's entire empire nearly came crashing down several times because banks refused to do what he needed them to do.

I've been having one of the most frustrating situations of my life dealing with Wells Fargo and although It's not severely affecting my businesses (yet) they have been holding nearly $100k and giving me the run around as to where it is and why it hasn't appeared in my account for several months. Banks are dependent on other people's money and because of this 3 month drama I am leaving their bank. I'm on the verge of putting my story and some of the specific and incredibly rude and unprofessional ways they've handled this in an email so just for fun I did the math on their potential loss when I tell 11,000 people not to use their bank.

I had to guess and so I figured most photographers on my mailing list probably bring in between $40 - $100k a year and so I took an estimate of $50,000 per photographer and if all 11,000 photographers on my list vowed to never use Wells Fargo for their banking that would cost Wells Fargo $550 million every year which adds up to $5.5 billion dollars over the next 10 years. All because of terrible customer service. 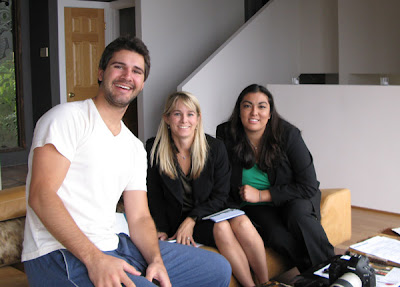 Deyl's been talking to me about how important it is for me to start developing relationships with banks so things like this don't happen so yesterday I switched all my accounts to Santa Barbara Bank and Trust and at 10am today had two bankers come to my house to finish signing the papers. Banking in my PJ's! This is how it should be! If you're in California and need a solid bank with people to talk to instead of the robots that Wells Fargo makes you deal with go checkout Santa Barbara Bank and Trust.
Posted by || davidjay || at 9:07 PM

Wells Fargo sucks! They are the most fee happy bank I have ever seen. I was out of town and had to cancel my debit card because it was compromised on the web. They charged me $3 for calling in!
I was so happy to drop them.

Great post DJ - we have similar problems over here i the UK. I've been with First Direct for a long time and to be fair, they are excellent!

I would hope that Wells Fargo try and contact you, at least to say sorry! (the power of the web and communication, something a lot of companies have not quite grasped yet!).

Definitely write about your experience, post it on your blog or email it to the people at the Consumerist. Lots of people check that website to know what businesses to avoid.

Oh my, sounds like Tanner's experience with Direct TV. The power of good or bad word of mouth advertising can make or break a business, customer SERVICE is paramount...let 'em have it!

Right on! I have refused to do business with the mainstream banking industry since the "unrest" in Isla Vista in the late 60's. Yes, I'm an old hippie who was a student at UCSB during the infamous burning of Bank of America. Now I always use my local community credit union and am rewarded with great customer service, the best interest rates and tellers who know me by my first name. Gotta love it.

I'm sorry you've had problems, DJ. I'm almost always a fan of the David's in the world (not the Goliaths)...but I have to admit...I've been happy with Wells Fargo mortgage services. I didn't choose them -- they bought my mortgage on my current home (as they did on my last home as well), but I haven't had any problems...knock on wood.

Dude this is crazy. I've been in a battle with Wells Fargo over my business account as well and now ING with my personal account (ING took over my old bank after the FDIC closed it).

I told Chrystal last night that I was going to go to SB Bank and Trust or our local Credit Union and open an account.

Toronto Wedding&Portrait Photographer, Andreas. said...
This comment has been removed by the author.
10:04 AM

Up here in Toronto we have the same problem. It's a worldwide thing man, and you just do what you can do. People think that because they are just one person they don't have any power, but as you pointed out..look at the numbers! That is a LOT of business if everyone does leave. Great post.
andreasphoto inc.<
Blog<

funny... I've been on the fence about city bank for a while... thought about SB Bank and Trust... I'll have to look more into them!

yeah DJ! good for you. wells fargo sucks big time, usaa rules. (not a local bank, but i am continually floored by their service). i've a hell of a time trying to get my money transferred out of wells fargo without long lines or crazy wire fees.

This makes me nervous.

I just opened a business account with Wells a month ago.

in addition to great banking...there's always fun perks that come from relationship managers :)

boo... wells fargo. i switched from them a long time ago because fo their fees! i love my credit union. good luck.

DJ.. I heard all the same horror stories about Wells Fargo.. you are probably better off with a local bank that will take better care of your financial needs.

I put all my money under my pillow.

DJ, when can I come lounge in my pjs in the freedom house too? :)

Amen to that, thanks to San Luis Bank and Trust, they have been the biggest blessing ever for us to buy our 1st studio/commercial spot. You speak da truth bro.

Hi David,
I used to used SBBT when my ex and I owned two surf shops. One in Santa Barbara and one in Ventura, Ca. We had an unusual last name(Pu'u). Whenever a customer used Discover or American Express at one of our store, the money went into his parents personal account! They had same last name and banked there as well. It was a matter of people not looking at account numbers, just looking at name. His parents thought the money appeared "from God". The bank would not reverse the transactions and sent a nice person to our store, after hours on a friday. They told me I had to retrieve the money from my inlaws!(didn't happen) Then the same thing happened with the IRS and the bank froze our personal account. Once again, not looking at Tax Id Numbers. Any banks can screw up. It's how they handle it that counts. Bottom line. Check Statements!