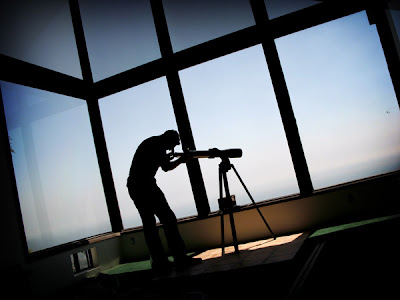 Despite Brett's overwhelming confidence the gift is actually a telescope! So awesome! We've been spying on all of Santa Barbara today! hahaha! It's so fun we can see people walking on the pier and riding on their boats way out in the ocean! Gnarly crazy!

Deep down I had hoped that it was Regis and RSJ riding on a pony but the telescope rocks! and congrats to Jeannie Cochran who guessed it!

Another crazy thing happened and that is that someone bought Showit Web from Austria and Iceland! Whoa! Showit Web is now being used in 37 countries!

ha ha ha.. thanks for the email notification!

now, look down Carrillo till you get to SB Street, building on the left, 3rd floor up, 2nd window in, and WAVE! hee hee.

I wish it was me too on a pony delivering RSJ to you.

... although we would be arriving on a Zebra :)

sweet. now we can stalk neighbors :)

I think you should check out the music of 16 Horsepower. It is meaningful, technically impressive and apocalyptic in a hip sort of way.

Yay!
Before you go too wild looking at your neighbors, you should check out the Hitchcock flick, "Rear Window! :-)

do my legs look fat in that photo? i'm losing my girlish figure

Maybe it was a timing thing? b/c I sure was laughing (still am, actually).

i love the music player.

Aww man! I REALLY thought it was an expresso machine!:(
lol!

Sweet telescope!! Too bad you can't take pictures with it!!

I think you should marry Amy Nave.

Doh! Silly healthy people... they SHOULD have gotten you a bike.

awesome gift. i wana buy showit web i think about it all the time, it would make my life so much easier. then you could add nz as the 38th country. I'll just wait until you decide that you'll give it to me for free. haha.

Now I'm sure you can see us from your house. I'll wave you a little "good-night DJ wave" on my front porch every night.