One thing I've learned from being an artist is that when rules and expectations are brought into the "picture" the result is often less inspiring than it would've been had they been left out.

Artists kind of work within the craziness of their own minds and I think some of the most brilliant art and ideas come when people have the freedom to explore deep within themselves thoughts that they would never dare verbalize. I think art is something that still may remain better by not being democratized.

So when the architect came over and walked through my house and talked to me I looked at him and the way he dressed and the style in which he carried himself and said, "Just trick this place out" - I immediately knew that he would do a far better job without me telling him what I had envisioned and sure enough his first drawing came back with something I had never even imagined and I am so amped.

This is the current entry way.... 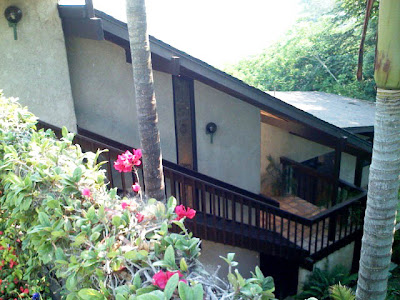 ....and this is what it'll look like after round 2 of the renovations...and as you're walking down the stairs you'll see straight through the house to the most incredible view of Santa Barbara and the ocean because the back of the house is already open. 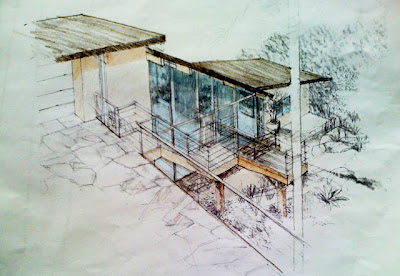 The first round starts Monday. They're coming and smoothing out the interior walls and then ripping up all the floor to put in bamboo floor in 4 of the rooms and a bit of carpet in places that we're gonna end up ripping up in phase two like the stairs.
Posted by || davidjay || at 4:34 PM

hmmm...guess this means I should throw away that ten page list of "must-have" shots for the wedding I've been typing up to give you, huh? :P

wow thats gonna be so amazing! i am excited to see it someday...so how about that workshop?

Whaoww, it will be very nice after renovation !
very fun !!!!

I hope to see that one day !

Have a nice day

That is really awesome. I love remodeling. It is super fun and I know you'll love being able to make your house reflect who you are. Chrystal and I have had such a great time doing that.

Remember my dad builds homes for a hobby and is an engineer by trade. Call me if you want to chat with him about ideas for materials or places to get materials.

Either way that place is going to be "tricked out".

Shhhweet! I love architectural drawings... makes me want to be one. Ha!

That's a great idea on his part... looking forward to seeing it come to life!

Architects have such a unique gift.
I wouldn't even know where to start with designing something...I take photos of buildings sometimes because they are so amazing.
Architects are indeed artists.

flat roof! brilliant! much safer for jumping off into the pool :)

It's so true what you said about artists. It truly will be the freedom house if the exterior walls are glass and the interior walls don't exist. It looks sweet! It's going to be so awesome.