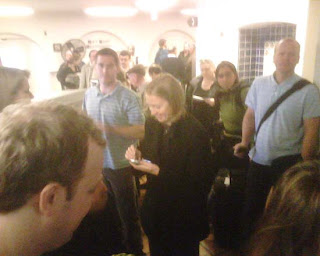 U.S. Airways forced everyone to deplane because there was so much fog in AZ but they didn't tell us if the flight was just delayed, cancelled, or what they were planning to do with us so there was 150 people sitting on the floor in the Santa Barbara airport wondering what is going on for the past 6 hours. A KEYT news crew even showed up and interviewed people but still no announcement from the airline. The flight schedule at the airport remained as it was when I arrived and the online system showed that our flight had taken off and landed at 12:28...lol...it's pretty funny that the airline gives actual departure and arrival times when the plane is sitting at the airport.

After sitting around since 5:30 in the morning with no communication I was over it so I convinced a baggage girl to go get my bag which had been sitting with everybody elses out on one of those carts and I came home. 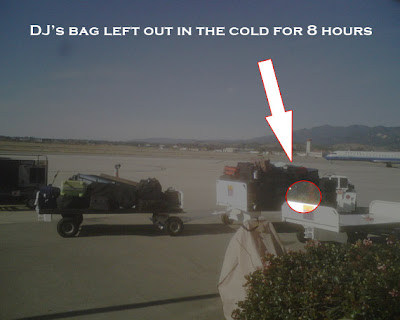 It was really interesting to see people's attitude shift through the entire experience. At the beginning everybody was calm....even for the hour and half we sat on the runway. We understood that it wasn't the airlines fault and that a weather delay had caused the problem. We got this information from the pilot who was fantastic about apologizing and communicating the updates every chance he could. I was very impressed with the pilots handling of the situation.

...but once we were asked to deplane the communication ended AND the decision making ended. Nobody from U.S. Airways communicated anything to anybody for the next 6 hours about the status of our flight, our bags, or even where to wait or what to do...and that's when people started to get bothered. U.S. Airways actually called in a security guard to stand behind the ticketing agents and I don't blame them. It was madness and nobody from the airline took charge.

It appeared that a bunch of interns were left to run the airport while the boss was out enjoying the holiday. I actually started to organize lines so people could get to the right agents and not be in a big moshpit of bags and angry people. It was kind of fun because I was moving those poles with the stretchy ribbon in it and I felt kind of important at that point.

Moral - The importance of communication and leadership in "crisis" situations. When something goes wrong, and we all know that things will go wrong, communication becomes 100x as important and decisions need to be made - FAST! In situations like this the longer that customers go without hearing from a business the more negative the perception of that business. Make decisions and communicate through the entire process.
Posted by || davidjay || at 1:47 PM

hey sounds like us in the aspen airport!! yeah...not many things more irritating than sitting at an airport for an undertermined amount of time with no info.

Well, if you end up staying at home I guess we could just come out their again!!! lol!!!

You should have flown into Tucson and then driven up to Phx. Its clear here.

Aw - sorry about the delays DJ - that stinks. How about taking a nice road trip in that GPS-ed up car of yours :) ???

I got rebooked on a flight at 6:30! Yea! So I'm off to try this again! If this flight doesn't workout I hope all of you will come to Santa Barbara for Christmas - There is this nice buffet that they have out on the Pier Christmas night that Sarah, Pastor Joe and I had last year and I've been dying to do it again!

:) Amber, sorry your were stuck in Aspen - CO has been insane!

Here's some leadership for you in a crises situation ... if the next flight doggs you, come immediately to the OC for a Sanders Family Christmas. Seriously ... chow's on!

aww dj - we hope you made it home ok for xmas - we almost kept crystal and jeremy in denver for xmas! here's hoping you make it home to family. have a merry christmas.

did you make it? thats so weird...it didnt seem foggy at all! strange. well i hope you make it home to be with your fam. if not i know you have good friends like dane whos christmas you could crash ;) take care and merry christmas!!

ps...thanks for commenting my blog!!! it makes me look so cool ;)

Thanks you guys! I love you all and I made it to AZ! Yea! It's great to be home!

Amber - You don't need any help looking cool! I still remember you at the AZ Pug with your little Von Dutch hat on and I was thinking - now that girl is cool.