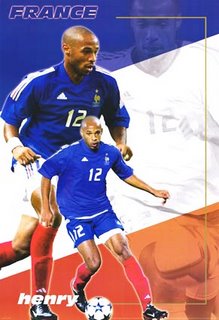 Last night was an incredible night for France as they took down the world soccer powerhouse Brazil in an awesome 1-0 nail biter :) Thierry Henry scored the winner and since he's from Monaco it was nuts here!

Here's a little video - we got to watch the game down with 1000's of crazy French fans and a few very surprised and devastated Brazil fans. :) 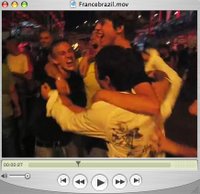 :) Now we're off to Naples...I'm really tired today because we stayed up late after the game doing some filming so I think I'm gonna try and sleep on the plane.

...and Mark thanks so much for the World Cup Map! It's awesome! I opened it right before I left and I should've brought it so I could track all the games on there but didn't have room so I'll have to fill it in and post it up when I get home. :) You rock man!
Posted by || davidjay || at 1:52 AM

oh, I bet you're in heaven with all the soccerness going on:) (I think I just made up my own word)

I was one of those who never thought anyone would beat Brazil. Cheerish these moments as you were there and were a part of history. I was in Germany during 2 world cups, so I know the people in France just lost their minds! Take plenty of pictures and videos as this is a story you'll share with your grandchildren. Oh, and the women in Italy are out of this world - from one single man to another. ;-) Be blessed and have a great time!