Today was such an awesome day! It started at 4:15am when my alarm went off to catch my 6:30 flight to Phoenix...but before I got outta bed I checked my email on my phone and noticed that my flight had been cancelled - bummer - but not really and here's why. I called United and they had already put me on another flight at 9:40 which wasn't available before so I was like "SWEET!" Back to bed.

When I rolled into the airport they asked for volunteers to fly U.S. Airways instead and so I signed up and got a free flight and a direct flight to AZ from San Diego!

...but the best part about Today was of course the PUG meeting! It was packed and we talked for 3.5 hours and then went to eat, relax and chat some more. The AZ clan is a super cool group of photographers who all seem connected and involved in each others businesses which is probably just one of the reasons why they're rocking! 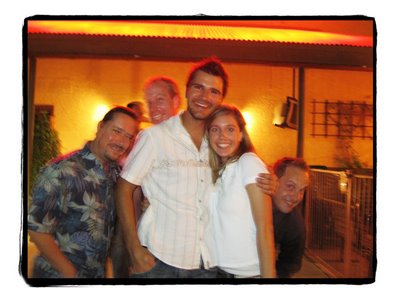 Great night! it was only your first night...don't worry we'll all be able to top last night..woohoo for sushi.

AZ is like my fav. place, it was soo cool the one time I was there!

Hi. Although I'm new in this blogger, I've been looking at david jay's work for some time. I've come from humble beginnings as a photographer but have managed and been blessed to make my way. I'm deeply grateful for your work and example.

Can't wait for tonight! It's so nice to be able to be here for a few days and relax a bit!

Thanks for the encouragement Nick! Rock on!

Thanks for dinner last night. It was nice to spend time with everyone... We (Me, my wife, & The Lyons) are seriously going to take you out sometime when you get back from your "World Tour."

Thats sooo awesome!!
Hope you have a great time with your parents!!!

I just got back from kayaking down the Salt River and I agree that it's freakin' hot out. We're supposed to hit another wonder record for the day at 115 degrees.

See you tonight for some more great times!

Hey,
are you gonna hang with us on Sunday?

AnotherCrazyCrook said...
This comment has been removed by a blog administrator.
3:04 PM

Hi DJ! It was great to finally meet you in person in Scottsdale and I was so glad I got to hear your talk on workflow and such! I was really trying to stink in and go out to dinner with you all, but after just flying in at 6pm, I was 3 hours off schedule (east coast time) and didn't have a clue where my hotel was located.

Have fun in your travels! Maybe I'll catch you when you're in Philly!