I have some super fun shots from the plane trip but I left my camera in the car so I'll have to show you later... Virgin was running a deal so I flew first class which I'm so glad I did because I had been up almost all night filming a bunch of Freedom Club videos. It seems that everyone loves the content which is awesome and now I'll focus on raising the consistency. 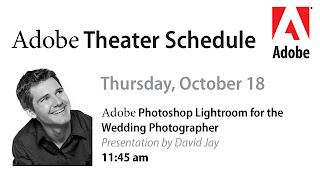 Some other cool news is that my buddy Frederick hooked me up with a gig for Adobe and I'll be kicking off a press event for them in New York next week where I'll show the media how it's possible for wedding photographers to wiz through our workflow using Lightroom.

Lastly, if you want to be the first to demo the upcoming Showit Sites come to Jason Groupp's studio next Wednesday morning at 8am. You can get an address from his website
and more info about the workshop at this website.

This is a great trip because I'm cramming a lot in. After this I have one more wedding in November and that's it. I have a full two months without a single thing on my schedule and I'm so amped.
Posted by || davidjay || at 11:40 AM

Hello My Name is Justin Murphy. I am a calgary wedding photographer located in calgary, alberta. My website is www.murphyimages.ca. I am new to this blogging thing....

! That intro for the workshop was awesome!! That looks like a blast.
Why doesn't anyone come to Minnesota?
(Um... I know. Because it's not New York or CA.)

Hey-- WHEN are the showit sites going to be available??
I'm very curious. And I know I'm not the only one!

Yeah-- I love the content on the FC vids. Looking forward to the next one.

Which weekend in November?

Sorry, I'm a lame-o!
I read about ShowIt S
Sites on the OSP forum!
(I'm new to that, so forgot to check there first:)!) Thanks!

Hey DJ, it was nice meeting you and Becker, Sarah and Matt this weekend. This Showit sites things sound awesome! I started using subdomains for clients earlier this year and its been a big hit.

We have to make time for burritos at Whales Tail during you two month hiatus.